Back to All Attorneys

Kim has tried jury trials throughout Virginia in both state and federal court, with the majority resulting in defense wins. Notably, she secured many of these verdicts in “risky” venues, including Portsmouth, Richmond, Hampton, and Norfolk.

While Kim defends every case with the expectation it will go to trial, she has eliminated risk for many clients by successfully arguing dispositive motions. Her preparation and dedication have prompted many plaintiffs to voluntarily dismiss suit without any payment from the defendant. Kim has also successfully argued for referral to the Virginia Birth Related Neurological Injury Compensation Program, thus precluding any recovery from a delivering physician.

Kim uses technology effectively both in and out of the courtroom. Jurors have reported her presentations made complex medicine easy to understand. Kim is further experienced at upholding verdicts on appeal and has successfully argued before the Virginia Supreme Court.

Physician groups have invited Kim to speak about the litigation process and she regularly counsels clients on litigation avoidance techniques. 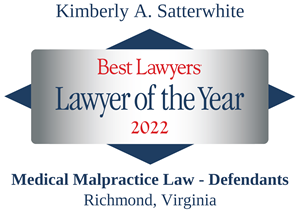