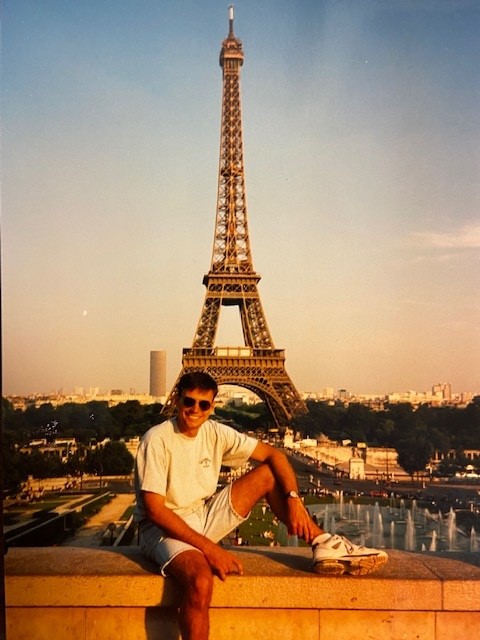 As we continue our 10 year anniversary and September comes to a close, it seemed only appropriate to turn the spotlight on Todd Anderson, who is also celebrating several milestones this year - 10 years with the Firm, 25 years of legal excellence, and a golden birthday!

Back story:  From age 10, I grew up in a small town in PA with one stoplight (and lots of cows). I worked on a farm picking strawberries and at the video store (not a chain – only 1 copy of new releases). I now live in Richmond with my wife of 20+ yrs, our son and daughter, our dog Blue, and a bunny. My favorite team (obviously) is the Steelers . . . even when they are up by 28 with 4 minutes to play and you know they can/will still blow it.

When I was a kid I wanted to be . . . The guy who gets to ride on the back of the garbage truck. Seriously. No one else gets to do that. That’s a cool job. Or Batman.

Worst job I ever had: One summer in college I worked construction.  The first day I had to de-shingle a roof but had no gloves. My hands lasted until the first coffee break and then someone lent me a pair. I bought some on the way home. I degreased machinery, was lowered into a 2 ½ foot wide pipe to blow ash back into an incinerator, built cabinets, picnic tables and shelving with no carpentry experience, installed giant fans in a factory . . . but also got to drive the dump truck because the other kids couldn’t drive a stick. Long summer. The next summer, I became a lifeguard. Lesson learned. Second worst job – washing dishes at a steakhouse . . . with a buffet.

Most daring thing I’ve ever done – Running with the bulls in Pamplona, Spain. (and living to tell about it)

Coolest thing I’ve ever done – In law school, I travelled Europe with some friends before studying at Cambridge in England. I saw the Colosseum and the Leaning Tower, celebrated July 4 in Nice, saw the White Cliffs of Dover, went to the British Open at St. Andrews, caught the Rolling Stones at Wembley and . . . ran with the bulls.

If I wasn’t doing this, I’d rather be . . .still Batman.  Remember, he is also super rich.

Favorite movie – It has to be Star Wars - saw it for my 5th birthday.  I still have my original Luke Skywalker action figure.

Best office emergency story – well, not my emergency, but once a partner came in on casual Friday and forgot about his hearing date.  He grabbed me (not my case) and I appeared in court to stand at counsel table while he argued from the gallery.  Basically, I went to court as his suit.  That was my total contribution – I was “attire.”

Best trial story – so many, but for my 1st solo trial (and 2nd trial ever), I had a radiologist coming on and was using the court’s brand-new equipment to project images on a screen (cutting edge, as this was back when we took view boxes to show actual “films.”).  I spent the whole lunch break setting it up.  When it came time for the images, I grabbed the cart and pulled it to the center of the room – and yanked all the cords out of the wall.  Everything went dead.  My first trial.  Fortunately, my paralegal saved the day and got everything running while I kept up the examination.  This is why you always need help at trial!

2nd Best Trial story – my client was studying to re-certify for his boards at the same time as his two-week trial.  During lunch, he studied.  As the jury came back from lunch, I had to tell him, “Can we discuss the optics of you reading the book ‘How to Do Medicine’ at your malpractice trial?”

Best back-handed compliment – While the jury was out:  “We don’t think we had ineffective assistance of counsel.”  Had to think about it to find out if it was good or bad.  But they were correct.  Defense verdict after 17 minutes.

Best advice you’ve received from a colleague – “Sit down.  You’re winning.”  That's the most polite way I've ever been told to shut up.

Inside Scoop - It's not surprise that Todd's quick wit adds a little laughter to even the worst work day. Here are just a few things people had to say about him:

"Todd has an impish personality and brings fun to the workplace.It’s like having your annoying sibling harassing you all the time.  He is kind and thoughtful, but very impish!  I’ve worked with him for close to 9 years and he has always been even-tempered and gracious.  He does a mean "morph". Now you see him….no, you didn’t, because he’s not there. I believe he can walk through walls."

"I just realized that all those time Todd mysteriously disappeared, he was probably actually responding to the Bat Signal! Maybe he really is Batman??"